The American Staffordshire Terrier is a relatively healthy breed, though it is affected by some unpleasant disorders. One of the most serious disorders from which this breed suffers is called Hereditary Ataxia or Cerebellar Ataxia. This is a neurological disorder of a serious nature and as of yet there is no cure; it seems as if the gene governing the disorder is quite widespread in the breed and often avoiding the breeding of affected dogs is difficult due to the late onset of symptoms. Research to find out the exact mode of inheritance and to find some kind of treatment is ongoing and owners of dogs with the disease are encouraged to allow their dogs to participate in trials and studies.

This condition involves the cerebellum, a very important part of the brain; it’s located at the base of the brain, just above the brain stem and spinal cord. The most important function of the cerebellum is the coordination of movement. It takes information regarding the position of the body and its muscles and integrates it with pathways coming from higher structures of the brain that involve movement commands. Based on the body’s position, the cerebellum is able to control movements with a high level of precision; the cerebellum is constantly working to maintain posture and muscle tone. If this area is damaged, the individual will have great difficulty moving and often swaggers and sways; there may even be cognitive damage as well.

Hereditary ataxia is a condition in which there is widespread degeneration of the cerebellum. While the signs resulting from hereditary ataxia could be indicative of a wide variety of diseases or problems that affect the cerebellum, this particular disease is characterized by a certain order and rate of appearance of signs. First, you’ll see your dog behave somewhat clumsily and he could begin to sway occasionally. Clumsiness worsens over time with the progression of the disease and soon the dog will constantly fall over, losing his balance. You may also notice rapid eye and head movements and walking will become much more difficult; weight loss is often seen in dogs suffering from hereditary ataxia. These symptoms usually do not occur in dogs younger than two years of age.

Exactly how the disease develops is still poorly understood and it actually seems to be different in different dogs. Signs are slow to develop in some dogs, while they develop rapidly in other dogs. As of now, this is a fatal disease as there is no cure and a normal life is impossible; Amstaffs with hereditary ataxia are more often than not humanely euthanized by the time they are 7 or 8 years old. There are no diagnostic tests at the moment to specifically detect hereditary ataxia; confirmation of the presence of the disease comes only through an autopsy, after death. If you see your Amstaff exhibiting strange signs, you must immediately take the dog to a veterinary neurologist who will perform a wide variety of tests to rule out any other possible condition that could lead to the same signs.

Cerebellar Ataxia is inherited as a autosomal recessive trait, which means a dog must have two defective copies (one from each parent) to be affected. A dog once tested will be classified as one of the following three classifications:

Clear - 2 normal copies of the implicated gene - the dog does not have ataxia, is not a carrier for ataxia and cannot produce carrier or affected offspring.

Carrier -  1 normal copy and one defective copy of the implicated gene - the dog is not affected by ataxia but is a carrier of the gene.  He can pass the gene onto his offspring.

Affected - 2 defective copies of the implicated gene - the dog has ataxia, and will pass the gene onto offspring.

The approximate breakdown rate of breeding a clear, carrier and affected dog is as follows: 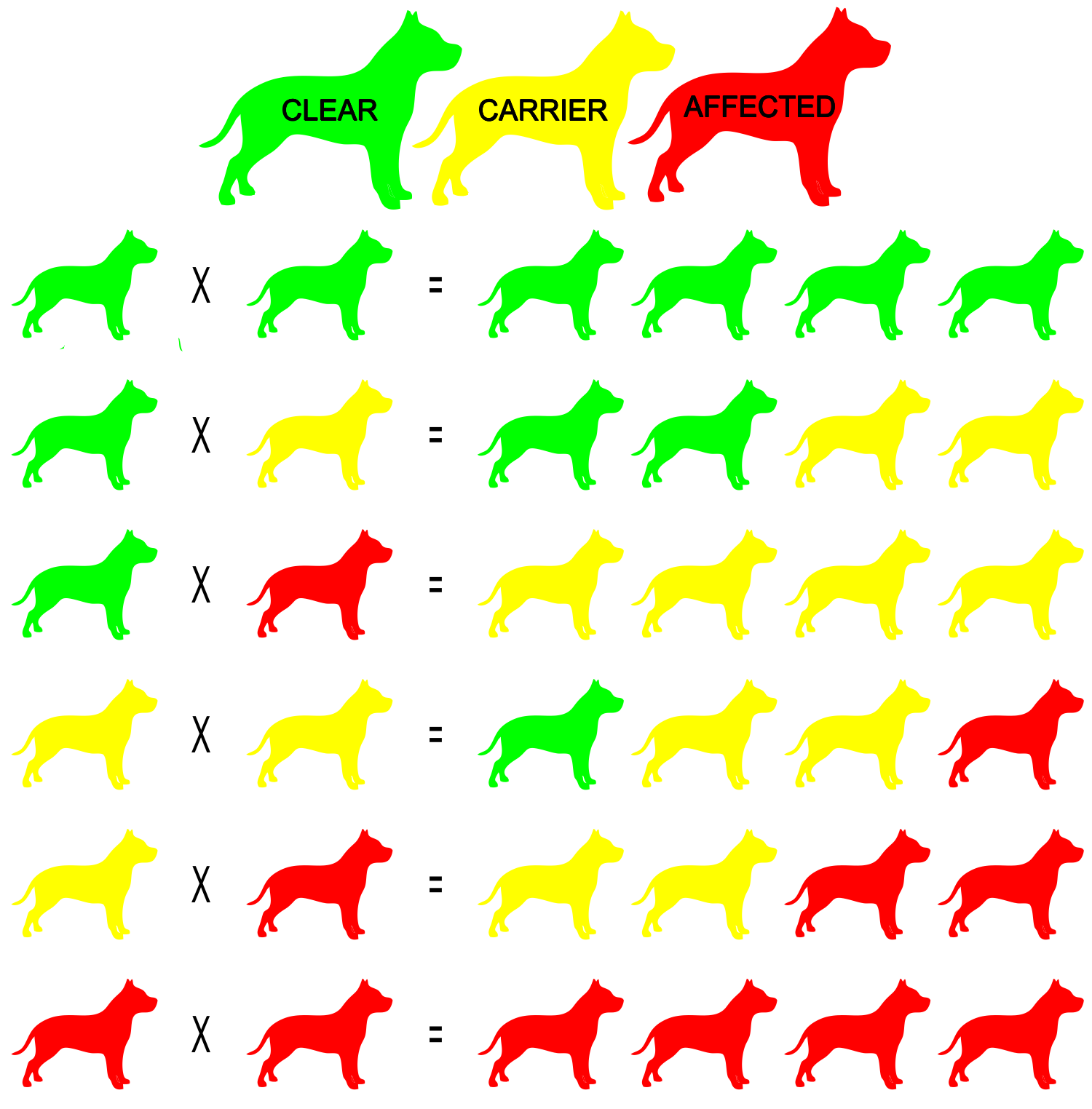 A test for Cerebellar Ataxia was found in 2008, there is no reason for a breeder not to have their dogs tested.

To have your dog tested, please visit Antagene's website.  You will need to request a DNA Swab kit from Antagene, once it arrives, take your dog and the test kit to your vet.  Your dog will need to be microchipped.  The vet will do a non invasive cheek swab and sign all the paperwork for Antagene, send the form and swab back to them along with payment and a few weeks later you will receive a certificate with your dogs status!

JSN Teki is designed by JoomlaShine.com